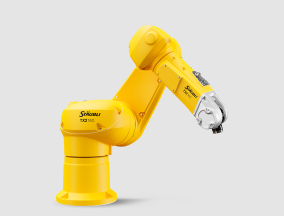 What is an articulated robot?

They are robots containing rotary joints, also known as axes, and most commonly have 6 axes. These joints are in series which make the robot resemble a human arm. Articulated robots are also the most commonly used robot in industrial settings.

Who invented the articulated robot?

A Stanford University professor called Victor Scheinman invented the first articulated robot in 1959. It had 6 axes and was fully electrically powered. He later sold his idea to Unimation who worked with General Motors to build them.

History of the Articulated robot

The first robot arm, called Unimate, was built in 1959 by Devol, Engleberger and their company called Unimation. They installed their first robot at General Motors in New Jersey to assist with the hot die-casting machine by lifting and stacking hot metal parts. Unimate weighed 1815kg and cost around $25,000. Unimation went on to develop robots to assist with welding and other applications within the automotive industry. In 1966 they granted licences to Nokia and Kawasaki to allow them to manufacture Unimations robots for use globally.

In 1973 Kuka built their first robot which was one of the first articulated robots to have six electromagnetically driven axes. ABB also produced the first commercially available all electric microprocessor-controlled robot. In 1977, Yaskawa built their Motoman L10 which was capable of lifting 10kg with its gripper.

How do articulated robots work?

Each axis equals a degree of freedom so the more axes a robot has the more freedom of movement it has. These axes can range from 2 to 10 or more.  The axes are typically arranged in a chain to allow each one to support the next one that is further along the structure. They are designed to closely mimic a human arm and its movement.

Servo motors are used to power the movement of each axis and enable the joints motion up to 90 degrees. The robots are typically manufactured from durable, sturdy metals like steel or cast iron so they can be used in harsh and physical environments. The robots sealed joints and protective sleeves enable them to work in clean and dirty environments.

What applications can articulated robots be used for?

What advantages do articulated robots have?

Robot arms are more flexible compared to other robot types due to their extra axes. They can shift and rotate parts during operation and easily adapt to process changes or variations through programming. They can also be mounted on floors, shelves or on the ceiling increasing their flexibility.

They improve production capacity as they have less downtime due to not requiring time off and can work overnight shifts. Less downtime means they can produce more throughout each shift.

They can fulfil many types of applications which helps to streamline the manufacturing process as one robot can be used to complete many tasks. If a process changes or is not needed anymore, articulated robots can be redeployed to different areas making them more cost effective and one of the most versatile robots.

They are fast and efficient and can handle hundreds of parts per hour with optimised movements. They are also precise and accurate while moving fast making them reliable as well. While achieving all this they also improve the working conditions of the factory as they can do all the dull, dangerous and dirty jobs and enabling people to do jobs that require more creativity or flexibility.

What disadvantages do articulated robots have?

They have an initial high cost of investment which may not be within the budgets of small or some medium sized businesses. The return on investment on the large industrial robot arms will also be longer which may not look as attractive as less expensive robots.

If a business does not currently have robot as part of their processes anywhere then they may need to hire someone who has the expertise and knowledge of how they operate once a robot is integrated.  Operators could also be trained up so that they know how to operate it, but the training required also needs to be paid for.

Even though they are more flexible than other types of robots they are still not as flexible as a person. They may not be able to carry out all the tasks required of them so people may still be needed to do some tasks.

They need constant monitoring to ensure that all its programmed actions are running as planned and programmed. Someone constantly needs to be there to check and monitor everything that is going on. However, as technology advances, robots can be monitored remotely more.